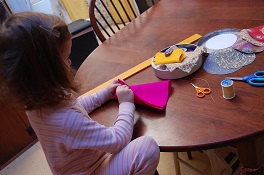 Yup, that was me on Christmas Eve night, sewing by the light of a headlamp… Everyone was sleeping and there was no “other room” to go into to finish putting together slippers for Josh.

This was the first year our handmade efforts were the majority of the wrapped parcels under the tree.  Boy does it take a lot of time.

Josh is good at this.  He’s been working on gifts for months, wherever he goes, whenever there is the remote chance of idle time.  Carving wooden spoons and spatulas… 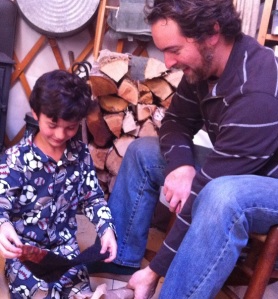 And making his first sweater!

We all saw these crafts being made, living in a one room yurt.  But he tried his best to bluff the yurt-dwelling recipients about who would get which carved item or whose feet would don which color.  I really like gifts to be surprises.  It’s something I’m learning to get over.  It’s fun to have surprises, but also fun to see the process of someone making something for you.

One gift WAS a surprise when he managed to bypass the one-room issue altogether by doing a crafted gift swap with our friend, trading a carved spoon for her husband for these hand-felted cards for me:

They are so sweet I can hardly bring myself to actually use them.

First on the list… new stockings.  The ones I made last year disappeared in the storage unit fire back in June.  As Bill said, opportunity to make what you’d want now: 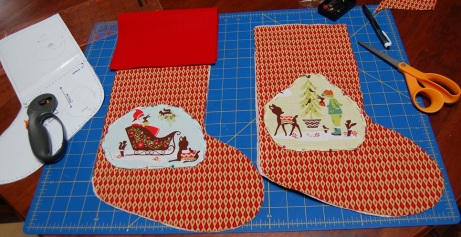 The fabrics came from Fiddlehead Artisan Supply (how I love this store), where I also found inspiration for some other holiday crafting, like felt flower hair clips:

And felt pouches from this pattern.  So many that the yurt started to feel like an elf sweatshop… 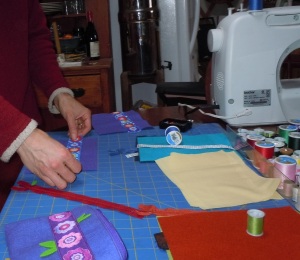 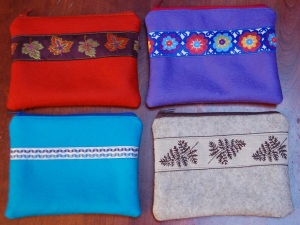 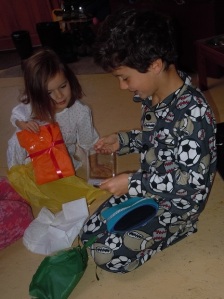 There were those slippers I was sewing for Josh on Christmas Eve night (from this pattern), along with a knitting basket liner so his needles would stop slipping out: 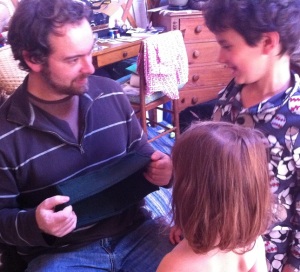 Then there was the messiest project of all – tissue paper lanterns.  I was thinking I’d make these with a little help from the small yurt people adding some paper here and there.  But they totally, completely, took over the making of whole lanterns as soon as the supplies came out. 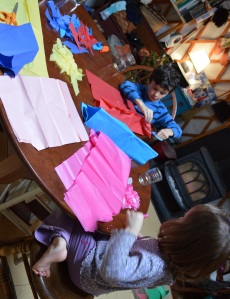 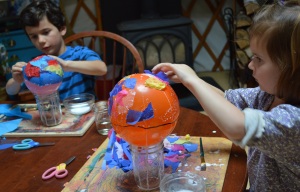 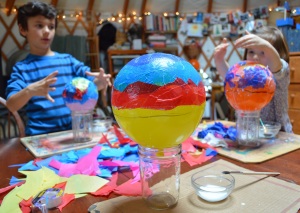 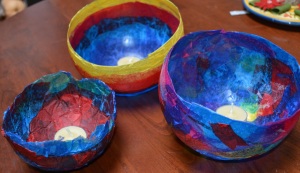 This seems to be how it is with every project I do to some degree.  Like with getting ready in the morning, for some reason I never seem to factor in the amount of additional time my crafting will take with children.  Josh seems to be able to carve or knit while the children play around him.  When I pick up the sewing machine, someone is begging to be able to press the peddle before I even have it out of the case.

I’d estimated it would take maybe an hour to sew each pouch.  But it was more like 1.5 hours for this one, 14 hours for that one…  Caden and Aria wanted to create their own versions of pouches or hand warmers or tree decorations right along with me.  Leading to me bouncing from one to the other to help thread a needle, tie a knot, fix tangled thread, attempt to rein in my dwindling felt supply…

I know it is worth my warped crafting timetable, even as I feel the pressure of how little time it leaves me to finish planned gifts.  I did learn ways to MAKE time in an effort to make space for the children’s excitement.  For one, Josh picks up my yurt chores slack very considerately.  True love.  And then for the first time in as long as I can remember, I (gasp!) didn’t send Christmas cards.  I never got much farther than picking out a picture for it. 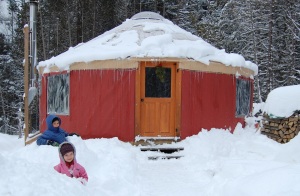 Wouldn’t that have made a nice card?  Sigh… 🙂

The children’s elf work might mean I can’t complete a project when/how I want to, and puts a serious dent in any perfectionism I might have, but they are so filled with enthusiasm about making and giving that I feel more than a bit guilty for wishing for my own craft yurt.

At 3-years-old, Aria is sewing.  Not just pretending anymore.  She’s REALLY sewing.  From trying to thread the needle to doing every stitch herself. 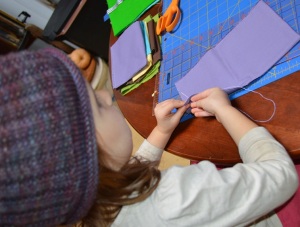 And when Caden saw a test felt flower I’d been working on, his first thought was to turn it into a present for his little sister.  He was off and sewing up a stem and then happily, secretly wrapping. 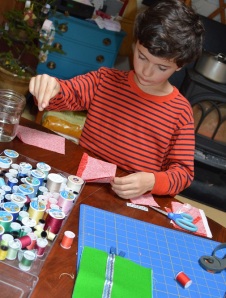 I notice that the majority of the time it takes to make something for someone, I am thinking about them.  About what colors, shapes, designs I think they might like, and just about that one person in general.  And when the children are crafting with me, we spend a lot of time talking about the recipients.

It’s the same when I’ve received handmade gifts.  When I went to make Christmas dinner, I thought of my mother as I looked at her stitches on my apron (can’t spill on that sweater!).  The same when I spread out a tablecloth she’d made.  She was very far away that day, and yet still somehow there with us because of this.

The same for Aria when she puts on the scarf that Josh’s mom knit.  She loves to tell people it was made just for her by her Mimi. 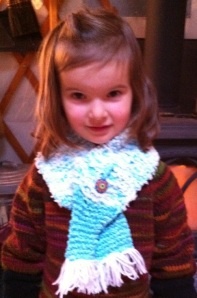 And I think of Josh every time I pull out a pair of socks he has made, put on my mittens, pull on my hat, and now when I wear this sweater.  Not just that he gave them to me, like the jewelry that he’s gifted me before.  But that he actually brought these into existence just. for. me.